Getting lost to find myself

As you know, for more than two weeks ago Manel and I continue this trip separately. I will not talk about that because we have already said enough, and what I want now is to look forward and to feel that motivation to continue this journey, without the discomfort that I had for this situation and without resentments, forgetting all that to feel what I’m looking for after all on this trip: Freedom.

It has been many days, so I’ll start with the moment when I started pedaling alone. But first I want to thank Anita for hosting us a few days in Padova, they were incredible days in a beautiful city. Thank you for your kindness and for the funny moments with you and your friends.

On Saturday 10 October, just two months after starting this trip, Manel and I said goodbay and took different paths. We were about Fusina (near Venecia). Manel left before, I was more a while to reorganize things.

I decided not to go to Venecia with him to seize the day and buy some things I needed to continue alone, but in the end the only thing I seized the day was to get lost. I am very careless, and I don’t think at least to take one photo of the Manel’s Italy map, so I left without anything to situate myself. “Asking I can get anywhere,” I said, regardless of the terrible orientation that I have. So I followed the directions of a man whom I asked to go to Trieste. At some point I lost the directions to the airport and took a very long straight road that led me in the wrong direction. “Only” almost 30 kilometers error, and another 30 to go back and take finally the right direction. In the end I had time to go through a Decathlon and Lidl to get what I needed.

The next day I decided to take a look on the rear wheel of the bike because I felt too much movement. I saw it had loose spokes, I tried to straighten it, but I saw something even worse: The rim was cracked in two parts. I needed to change. I decided to continue up to a bigger city so I can find a mechanic to help me. I thought it best to go to Trieste and watch it there. 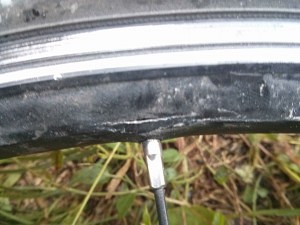 This situation made me more hurry to get to Trieste, so I took the SS-14 road. The wheel endured, reviewing it regularly. The bike also wanted to give me a flat tire so I could have fun. It was “funny” also the day I arrived in Trieste, It rained all day, 60 kilometer route, and although I carry raincoats, I ended up soaked. I could reach Trieste on time, where I spent a few days with Francesco and Giulia, to whom I am extremely grateful for hosting me, I had a really good with them and allowed me to have time to fix the wheel, improve the blog and visit Trieste, a city that I liked. 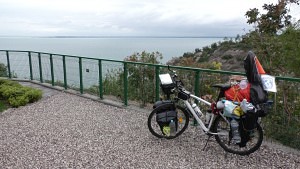 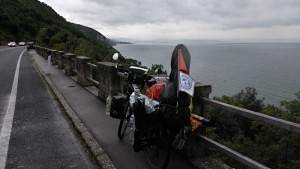 I left Trieste with the new tire and hope it endure more than the last. Without defined route or destination, I continued to Muggia, direction to Slovenia, I slept just before the border and the next day I entered the country. 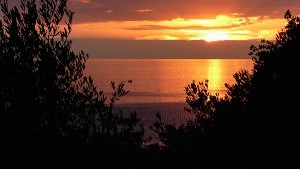 I kept wanting to lose myself (but this time in the right direction), so I was improvising the route. I went to Koper, a beautiful coastal city, and followed a cycle path parallel to the sea. Then I went back up the mountain along the Parenzana, a bike path built on what was once a railway, very cool track. It was one of those routes that you really enjoy, no matter if you are going slower or not. 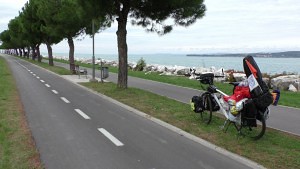 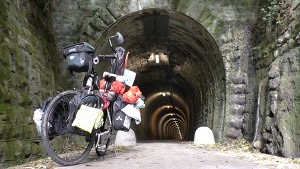 Slovenia lasted only one day, the part of the coast is not very long, but I still loved it. I came to Croatia, I was asked a passport for the first time on this trip. Upon entering I saw a sign indicating all cycle routes out there, and there were a few. I decided to continue along the Parenzana, until I came to quite impracticable part for my bike (it had also rained that night), then continued on secondary roads. Thereafter I was doing route to the coast, visiting beautiful cities like Umag and Novigrad. Then I went to the mountain to surround the Limski channel, that made me climb a little but enjoy good views and easier to find place to sleep. 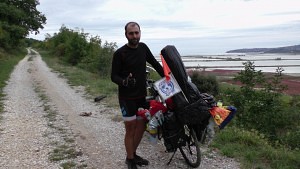 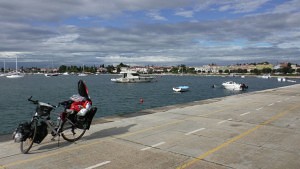 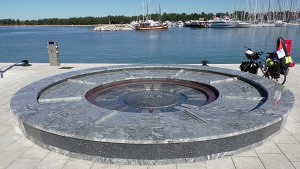 I met up again with the coast in Pula, where the rear wheel began moving badly. Had loose spokes, being new, I couldn’t believe it. I squeezed all spokes and tried to leave untapped. I’ll see how endures. The next day I visited a little Pula, I could see the arena, a roman amphitheater overlooking the sea, very nice. I stopped for coffee and for charging batteries and find someone hosting around Rijeka. 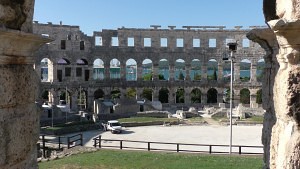 I left Pula along the road 66 (it’s not Route 66, but it’s nice :P), towards Rijeka. A lot of road with ups and downs, but the views were stunning. After Labin road approaches the coast and is superb. 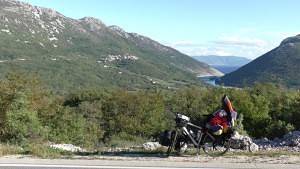 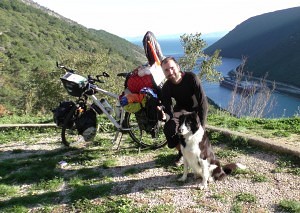 I finally found a family (Tatjana and Sime) that is hosting me in Bregi, near Rijeka. Reach the village was difficult, there was quite strong rises. But to get to the house there comes a point when I had to get off the bike and push (I think it’s the first time on this trip), but then Sime tied my bike to his car and drove to the house, so a pleasure to climb! (I know, it is cheating :P). I want to thank Tatjana and Sime how well you are hosting me, the views from the house are amazing. On Sunday we went to the top of the mountain Učka (by car), 1,400 meters high, and with really amazing views. 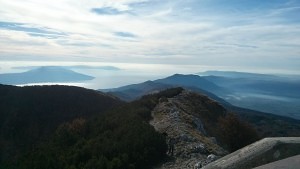 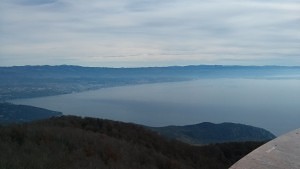 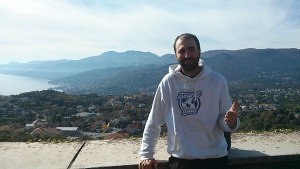 I’ll stay here a few days and then continue on the Adriatic coast (I have warned that it’s windy, I’ll have to be careful).

I want to thank Anita, Daniele and his family, Cristina and Luciano, Francesco and Giulia, Barussi Giani and his friends, Arsen and Robert, Tatjana and Sime, and all the other wonderful people I meet on the way and offered me his help.

Thanks also to all who read me and give me support. 🙂 I promise to try to _ write more often for not writing so long posts.

A hug to everyone!

PS: I don’t speak English, probably this translation have errors. You can report such errors in the contact form. Thank you!

8 comments on “Getting lost to find myself”