It’s been almost a month since I wrote the last post, and many things have happened since then, more than my own imagination could expect for that time interval. But it is something I begin to get used to, a week of this trip equals more time on my “normal” life, in terms of moments and anecdotes.

I spent a week at the home of Tatjana and his family, near Rijeka. It helped me relax after a week of route along the coast of Slovenia and Croatia, and also gave me the opportunity to meet several cyclists who went through that house and which I shared the apartment and good times.

I not planned to stay many days in that house, but something made me stay a little longer there. Speaking with Tatjana told me that at the weekend would come other three cyclists, but I did not know who they were, until I told her a story about two Frenchmen to whom Manel and I met in Menton. This French couple are Manue and Max, and when I said the names to Tatjana she replied “they are who come this weekend!” I could not believe it. 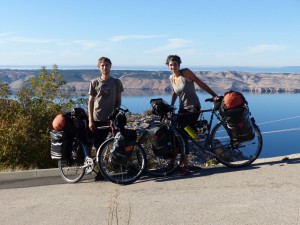 When we met Manuel and Max we were talking to them in the last town in France before reaching Italy. We found they a friendly couple and we shared a good time, but for some reason we do not exchange our names. They wrote on paper for us his blog, and put “Manue et Max”. Manel and I did not understand why they had written our names in a papel that was for us, until later visited the blog and saw that it was his names, we did not go out of our surprise for the coincidence. 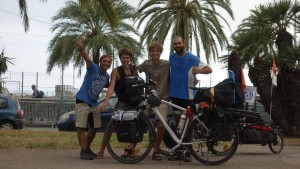 I am very glad to see them again. They are accompanied by Clément, another French cyclist musician who decided to continue his journey with them. They told me the possibility that I also join them. Really that cost me decide because my idea was to continue this journey alone, but again I decided to do what I felt, and I really wanted to share route with them. Like me, they also had to be in Greece for December, so we had the same destination and the same intention of continue along the adriatic coast. 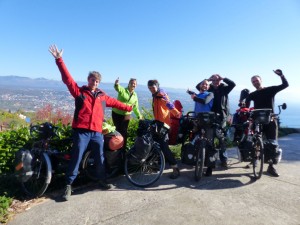 Manuel, Max and Clement share way from Trieste. Play the flute, accordion and guitar (respectively), and since they go together have started playing in the street and with that financed part of the journey. They call themselves “Les Musiclettes” (for “musique” and “biciclette”). I feel lucky to listen to their music (they play traditional French songs), I’m really enjoying it. 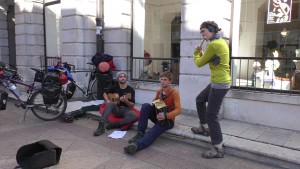 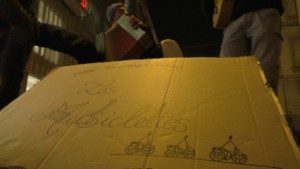 I would like to have more skills with the guitar to play with them on the street, but I’m satisfied just listening and watching that they make people happy listening to them and, occasionally, joining them rehearse, either with guitar, singing or humming his songs. It’s also really didactic talk to them in English, it is the first time I have to speak in that language for a long time and, although I have a lot to learn, It’s very well to practice and improve.

We four left Tatjana’s home and continue along the coast. After Rijeka we had so much wind, or as they call it there, bura. That first day we really had difficulties to mount the tents due to the strong wind, so we finally slept in a house in ruins that was very close. 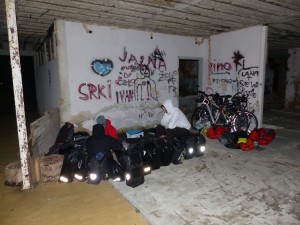 On the second day of route Clement and Max (the French one) had an accident on downhill, they were going pretty fast. Luckily nothing severe happened to them , but the rear wheel of Max’s bike was completely bent and needed changing. It’s an old bicycle and the wheel measure is quite specific, which is why we could not find a new around. 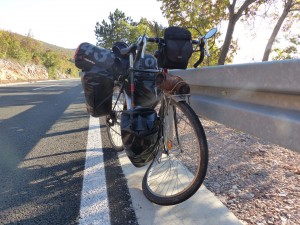 That problem led us to take a bus to Zagreb, the Croatian capital, where we expected to find the wheel. We leave the bikes and most of our baggage in the garage of a kind man who offered to keep everything. We returned to Rijeka doing hitchhiking and took the bus to Zagreb.

In the capital was waiting Lea, a traveler who know Max and Manue, and who offered his home for those days, many thanks Lea ! The second day in Zagreb was spent in seek the wheel, we walked Zagreb, store by store, and no luck until final attempt. It was night, but we had the wheel! To celebrate it we went to a place for dinner and drink rakija (a typical Croatian liquor, quite strong) while they played music. 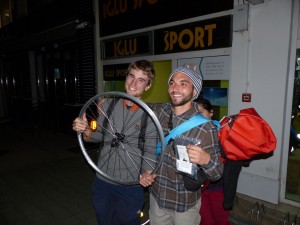 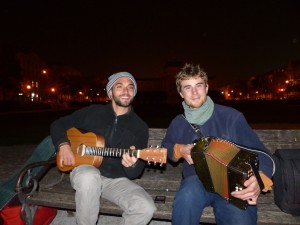 The last day we visit Zagreb . I found it a very nice city and, as in most capitals, with enough people and tourists. I could get a pin for collection with the flags of Slovenia and Croatia (two in one) and some winter clothing. That day also I break my phone, I dropped and, although the screen is good, the touch panel no longer works and makes it unusable.

We returned to the coast and its good weather. Zagreb was cold but in the coast seemed to be summer (now without wind), it was November but we had very good weather, in fact most of the night we sleept without tent. Now with Max’s bike fixed, we continued the route along the coast, with its ascents and descents, and we shared a few route days with Steven , a Belgian cyclotourist who was in the same direction and with which we enjoy good times. 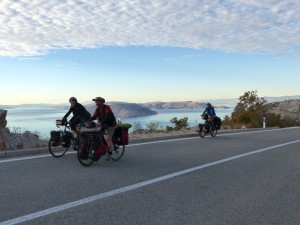 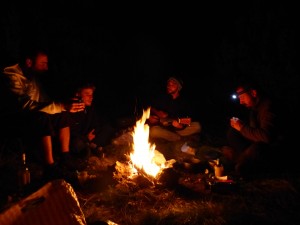 A meeting point for cyclotourists

The Croatian coast is wonderful, I think the landscapes are the best I’ve have enjoyed on this journey by now. So we continued the road near the Adriatic Sea. 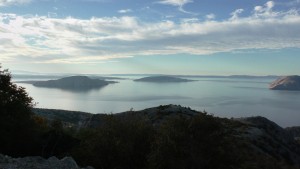 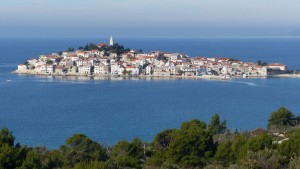 We arrived at a village near Split, where we had a house of a Warmshowers, but without the owner. Frane is the owner of that house, he no longer lives there, but that does not seem to be a problem to offer their home to travelers that needed. When we got home there were two other French cyclotourist who left the next day.

We take these days to rest. I looked for a phone sale on internet, but after calling several sellers I did not found any near Split that still sells. I was luckier as we continue and stopped in Split, I could find a second hand smartphone with good price after haggling a bit, so I again have phone (it’s important especially when returning to be alone).

Problems with the bike and the tent

I think at this point say I had a problem with the bike is not news, and less if it is the rear wheel. I can say that the problem of the rear spokes and their tendency to come loose because of the weight seems to have decreased after further tightening, but still had another component in the wheel which I did not exploded its destructionability: The tire.

During a climb towards Dubrovnik _ the rear wheel comes flat (that’s not news). When mounting the new inner tube I saw that what it was before some wear on the side of the tire had become a hole where the inner tube go outside when inflate. I needed to change the tire, but I needed to move to reach a city where I can find a new one. Clément made an trick with a plastic bottle so that the camera does not stand out, it worked! 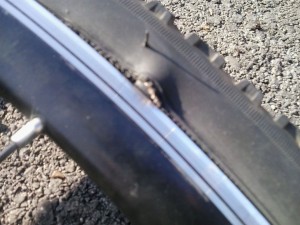 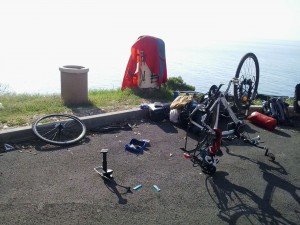 We could continue, although most of my back weight _ was distributed in the other three bikes. Then I realized that my bags overweight not only causes problems in my bike, also it affects my performance. It’s quite obvious, but now I’m more aware that I have to release all dispensable, and I’ll take advantage of my break in Greece to do so.

After a fleeting stay in Bosnia and Herzegovina we reentered in Croatia (Bosnian coast is only about 15 kilometers). We arrived in Dubrovnik with the tire so damaged, and also with a microflat made me inflate the wheel at least every day. I had to find a new tire in Dubrovnik , but it was harder work than I thought, considering that it’s a very important city and not so small.

We did not find any store or bicycle mechanic in the city, people told us that did not know any when we asked. That led me to use Internet, but the nearest was in Zadar, only the bus trip cost me 190 kunas (about 25 €), the option that sent it to Dubrovnik was cheaper but more complex.

Finally I found a car mechanic in to Dubrovnik which also sold some bikes and components. He had only one tire with the diameter I needed, but quite narrow. Until that moment I don’t knew that I could _ use different tire widths on the same rim , and in the end it was good. It’s a cheap tire (I preferred to mount in front wheel), but I think it will help me to get to Greece, where I will get a better one, with puncture protection. 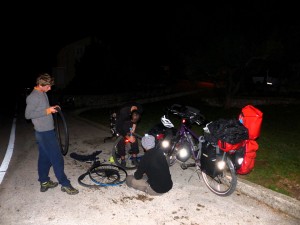 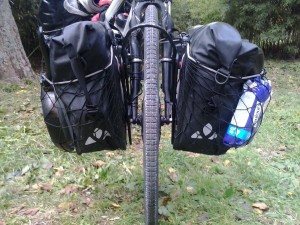 The same day that the tire said goodbye, in the morning I had another problem, this time with the tent (which also had some problems). One of the aluminum tubes decided to break with the tent still mounted. What a day! 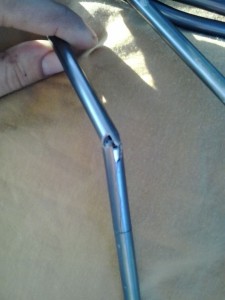 By the way, the old part of Dubrovnik is beautiful, very touristy (and expensive). 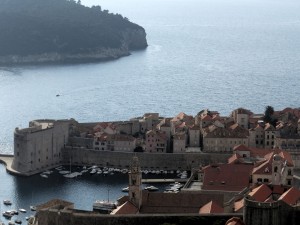 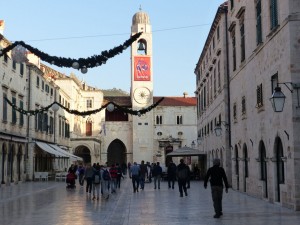 Before leaving Croatia we spent a few days with Marko, who has hosted many travelers and where we rested a little. We were lucky to get home before it began to rain, so those rainy days were spent with a roof to take refuge. Thank you very much to Marko for giving his home and sociable travellers space, we had a great time with him and his friends and neighbors, who we helped with some work and for what we were paid with good food, lots of drinks and great moments and talks, what more could we want? Thank you! 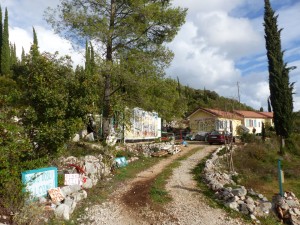 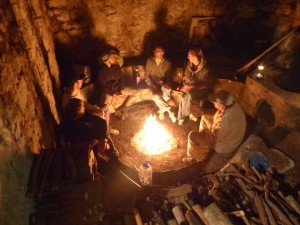 After saying goodbye to Marko and his friends we continue towards Montenegro (it was just 15 kilometers). We were short time there, it reminded me a not a to Andorra for the big mountains around us and to be slightly cheaper in some products. A few days later we arrived in Albania. The change from Croatia and Montenegro to Albania is very significant, Albania seems to be a quite humble and not a tourist country, people seem more simple (which I like) and greet us practically everyone on the street. It is also much cheaper.

Here in Albania we will separate to go to our different destinations in the Hellenic country. Manue and Max go to Thessaloniki, Clement and I will continue to Patras, and there I will continue alone to Athens, where I will spend the New Year and the beginning of 2016, and I will visit a friend and wait with overwhelming desire to the visit of was most important person of my life 🙂

Thanks for reading me! And thanks to Manue, Max and Clement for the fantastic moments that are happening together, we will probably see in Athens at end of the month. Thanks also to all the wonderful people we met along the way and who help us continue.Cheers to everyone! 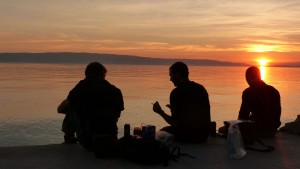 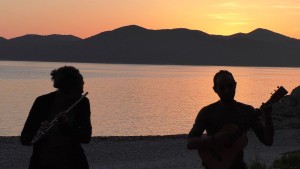 Share on: FacebookTwitterGoogle+
← Getting lost to find myself
Christmas and New Year in Athens →