Christmas and New Year in Athens

I wrote the last post about three weeks ago in Albania. The next day of publishing it Manue and Max took his way to Thessaloniki, Clement and I continued near the coast to Egio. 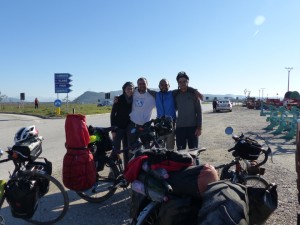 Goodbye to Manue and Max

The third day of the route with Clément was hard, very hard. Although we were near the coast, we had to climb between Llogara National Park and Mount Cika, and proved to be the hardest climb I’ve found for now. We climbed up to 1,050 meters, but the problem was the verticality of the climb, where much had to go weaving (my bike does not have very short developments, and excess weight does not help), and more than once I had to get out and push. Near the end of the climb we met Eva, a Polish cyclotourist who we already known in Albania. The descent was amazing, I love (and who does not) make curves in downhill with landscape so awesome as we had. 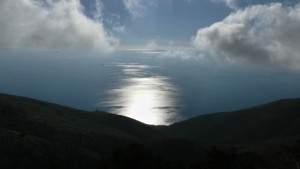 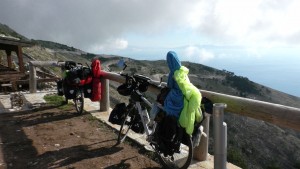 After that mountain we got Himare, where Nashos, the owner of a campsite on the beach, offered a parcel of it completely free (hot shower included), and not only that, he made us meal several times and gave us one and half liter of olive oil from their own harvest (we help he with the olive harvest). Nashos thanks for everything! We spent a very good days in Himarë.

Later we decided to get transport to avoid most mountain road coming to Greece, we did not have much time and we were tired (yeah, I know, it’s cheating :P). We came to Sarandë, still in Albania , it was late and we did not find a safe place to sleep for free, so we finally slept in a hotel (5 € per person). The next day we took a ferryboat to Corfu, one of the Greek islands. We were short time in Corfu but I liked it. There we spent one night, we slept in a gym with equipped swimming pool to train with rowing (one of the most strange places where I slept till now) thank you very much to the people of the nautical club NAOK for their help and sympathy. 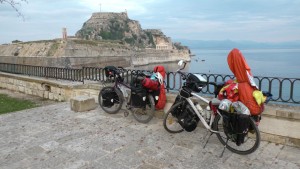 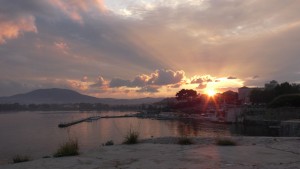 The next day we took another ferry to Igoumenitsa, where we took a bus to Rio. From there we continued cycling towards Egio, where Spyros and Valeria were waiting for us, thank you for everything! I spent some great days there. Clément will spend the winter there, so I continued alone to Athens. Was about 180 km to reach, finally I did it in two days (that of knowing you have a shower and a bed at the end of the road gives you strength). The first day I did about 60 km and a dog friend who accompanied me all night. The second day I beat my personal record in one day, 119 km, wanting to come to Athens without having to spend another night outside (looked like a rain and my tent is broken). 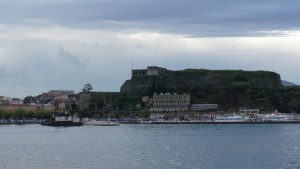 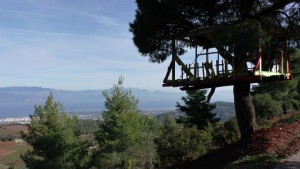 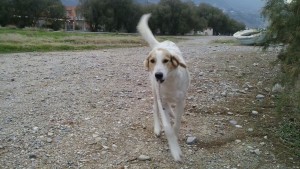 These weeks I’ll have time to upload all the pictures that have not uploaded until now (which are almost all) and to publish a posts talking about, for example, why I began this journey.

Thank you for reading! Your support means a lot to me. Thanks to Stelios and his lovely family who are hosting me in Athens. Also thank Demir how well he behaved with us in Dukat i Ri the day before the climb to Llogara, and all those people that I always find on the road and that brings a lot to this trip.

Share on: FacebookTwitterGoogle+
← Four travelers, one destination: Greece
Why I began this journey? →

2 comments on “Christmas and New Year in Athens”