Spending the winter at home

Although it has been a long time without writing, most of my people know what it is about me. I came back to Barcelona for the winter. I try to explain what happened since I left Athens, and why I decided to come back.

After spending Christmas and New Year in Athens (again, many thanks to Stelios and his family for those fantastic weeks) I resumed the journey on Monday 11 January. But the back to the route was for a short time, in fact just one day.

I was trying to get out of Athens towards Thessaloniki when a motorbike stopped in front of me. I had no idea what he wanted, until we started talking and he explained that he had also made several trips by bicycle and was interested in my story. After an interesting talk standing in the middle of the street, he asked me where I was going, when I tell my intention to go to Thessaloniki he recommended me that I can go on the island Evia, he had ever done that route. I didn’t had practically a route designed to reach Thessaloniki, so I decided to accept his advice.

I arrived at Ag. Marina, from where the ferry go to Evia. It was getting dark, I found a good place to put the tent so I decided to spend the night there and catch the ferry the next day (also did not know if would come more ferries, but then from where I was I saw it coming, I had privileged views :P). The next day I got up a little late, over breakfast I saw the ferry coming, I thought I would not have time to get it, so I gave it up for lost and waited for the next. I pick up everything and when I see it coming aga from afar I go . While coming down I noticed that I had lost the speedometer, I had to turn around and look for it, thinking I would miss the ferry again. At the end I arrived, but just in time.

While traveling on the ferry with beautiful views, a guy spoke to me in Greek thinking I’m Greek. I told him I did not speak Greek (with my bad English) and he asked me what language I speak, I replied that I speak Spanish, Catalan and a little English, and he began to speak Catalan, I was surprised. He is Erik, an American who lived in Barcelona a few years, and he told me he was going to the island to spend some time in a house in exchange for taking care of it. 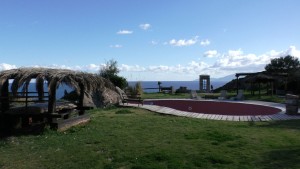 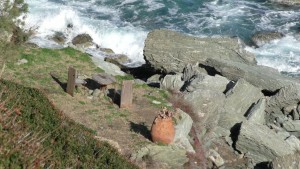 When we reached the port he proposed to go with him to the house, as I did not have many plans I accepted the proposal. Alex and Tim came to pick us up and took us to the house (after put the bike and my stuff in the car, we almost could not fit).

The house is amazing, it’s lost on the other side of the island, but is impressive. There I met Louise (Tim’s wife) and other friends who came to the house, I send a big hug to all of them. 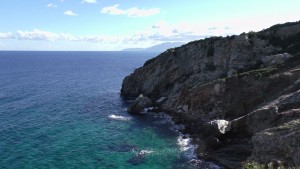 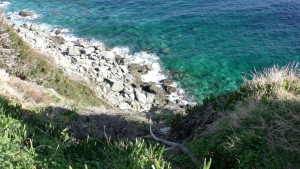 After all these coincidences that made me meet Erik and end up in that house, I decided to spend a few days there, helping whatever I can. I took the opportunity to investigate about the next countries I planned to take in my route: Turkey and Iran. I saw that in Turkey I would expect a tough winter, very cold in the middle, less cold near the Black Sea but a lot of rain. Then I saw I had the opportunity to spend the winter in the house (yes, I’m a shit), and then came to the conclusion that I could pass the winter in my house, mainly because I missed Fio and my family and friends. I wanted to see them and my parents especially needed to see me (Fio at least I had seen in Athens). For this and other reasons (some think that mainly to watch Star Wars :P), I decided to go home.

I bought the ticket and left the bike and almost all my stuff in the house. I said nothing to anyone, I wanted it to be a surprise. To get from the island to my house I had to take the car (thanks to Erik for taking me to the port), ferry, bus, subway, plane, another bus, train and another car, that is, a day of travel, but definitely worth it.

On March 10 I will return to Greece with my bike, a part of me misses it a lot.

I want to thank Erik and all his friends for giving me the opportunity to meet they and pass on that dream home a fantastic weeks. 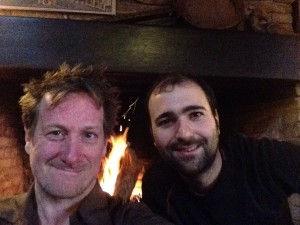 A hug to everyone!

Share on: FacebookTwitterGoogle+
← Why I began this journey?
The end of a journey to remember →

2 comments on “Spending the winter at home”