The end of a journey to remember

As many of you know, during my break at home I decided to end the journey and definitely return to my homeland. It was a difficult decision, so until the last moment I have not decided.

I write these lines already from home. I had a return ticket to Greece, because my plan was to continue to Turkey, which is why I returned to Greece to take my bike and started my (fast) back home. I went from the island Euboea to Patras, from there I took a ferry to Ancona (Italy). The plan was to do the way from Ancona to Civitavecchia also by bicycle, but I wanted to arrive early and had pain in the ass (perhaps having done 147 kilometers one of the previous days) I decided to take a train to Civitavecchia (via Rome). What the desire to arrive soon does not mean I have lost interest in traveling, but I must admit I had not the same motivation pedaling toward Asia to do back home. In Civitavecchia I took another ferry to Barcelona.

Why I decided to go back?

Although I had more or less planned the route, last minute I decided to return to home. Why? Well, as you know It was hard to me being away from Fio (my girlfriend) during this time. I could give other reasons, not only I missed her, also my family and friends, but for me the hardest thing was being away from her. I thought if It was hard to be away for four months, from Asia probably would be longer and less chance speak at a distance, because the internet would probably be more complicated.

So I go back for her, and for me, but with the same enthusiasm with which I left. I have always been divided on this journey, I tried to enjoy (and enjoyed) each time and place in which I have been, but on the other hand I missed to enjoy that time with Fio.

What was this journey?

What I am sure is that I do not regret having undertaken this journey. They have been traveling about seven months (more or less five of route, at the end of the trip I have been quite stopped), which for me will be unforgettable. Many things have happened during this little piece of my life.

I discovered firsthand places that previously could not even locate on a map. I have lived with each pedal stroke. I have been to places that hardly have found traveling in a more usual way.

I’ve met really wonderful people. People have been the best of this journey. People who have helped me almost every time I’ve asked, sometimes even without asking. Other travelers with whom I have met and I have had the honor of sharing route with them. I take the hopeful conviction that in this world there are mainly nice people. Unfortunately those who are bad are those who we hear about more, they make more noise, but my experience in this journey tells me that they are a minority.

I’ve got confidence in myself. If someone tells me a few years ago, before deciding to do this, I would even get cycling to Greece, I never would have believed. A few pedal strokes were enough for my lungs would leave his cabin. I’ve never had a good fitness, so I am convinced that anyone can do something like this with enthusiasm. But more than the physical aspect, this journey for me was a way to improve as a person, I had to adapt and learn to live differently, bringing the house on my back and living with what was in it, without more purpose than to go ahead, without more way than I myself was discovering.

What wasn’t this journey?

At the risk of being obvious: it has not been around the world. I say this because this project was that in theory. Forgetting why I return, the concept of around the world was a very big project, when I started I had that goal in mind, but I knew it was not certain to do so. I regret a little focused and shown this project as a around to the world, as it actually was going to continue as I had desire and illusion, because once you lose that in my opinion is useless to continue. If I did not have a reason to return I don’t know how far I had come, but I would have continued, because I was still with illusion.

This was for me the first time I travel by bicycle, and I took an idea and expectations about something I did not know at first hand. I probably would focus differently if I could go back, but there are things you do not see until you’ve already begun.

It has not been a life change, rather a long journey. Although it has changed my way of life during these months, for me a life change involves having to survive when you have almost nothing. In my case I was able to stay so far with the little money that I started (I still had some money to continue, but not much). I keep wanting to get to that point where I had to survive economically lost around, whether it was playing (on major improvement) guitar on the street, helping in any house, selling things or doing any other work.

This journey is over, but it has helped me to discover a new way to travel (as I said in another post, for me to travel by bicycle is traveling at the speed of life). I do not discard take other journeys in the future, I do not know from where, to where or for how long, but for me it has been an amazing experience and I would like to repeat it. There are some travel plans by France and Spain with Clement, Manue and Max, we’ll see 🙂

About this blog, I keep as is for now, may I take to post some other personal posts, not necessarily related to cyclotourism. Also, when I have some free time, I want to finish upload all photos of the trip so that you can see it.

I want to thank again all the great people I have met along the way, including those who have shared route with me, and of course to all who have followed this adventure in anyway and you have shown me your precious support. I also want to thank Fio their comprehension to understand why I wanted to do this. Although it would be an even longer trip, she gave me the chance to try, I know that not anyone would have done it, so I know you’re special and that is why I wanted to get back to you. No need to travel the world to realize that it’s not easy to find someone like you.

Sorry for those who follow this blog with the desire to read my adventures around the world you may have to settle for what lived these months. To all of you who have been wanting more I remind you that you can follow the Manel’s around the world in www.losviajesdemanel.com and the journey of Manue and Max in europeablecyclette.wordpress.com, and in the network will find many cycloturists traveling the world (I myself was surprised at the number and variety of people I have met on the road traveling by bicycle), to all of them I send encouragement and strength, keep pedaling long as you have illusion for getting lost in unknown worlds.

I want to dedicate this journey to my uncle Santiago (for all Chari). I’ve carried with me the whole trip with the hope that in some way you traveled with me. You liked to travel and I know that many places where I was you would have been delighted. Since you are in our hearts, I can say you’ve been there where I’ve been. We miss you so much… 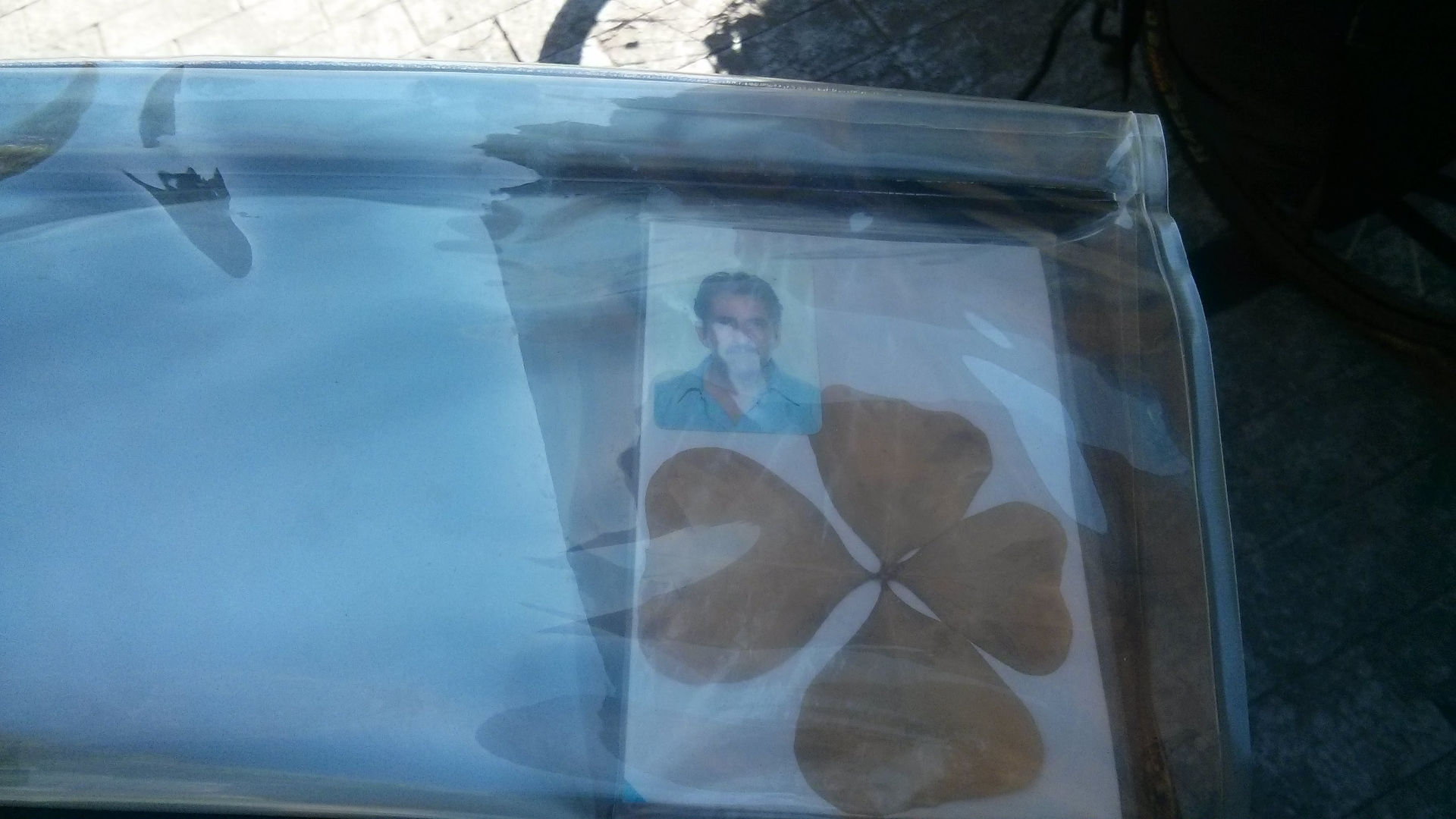 My uncle with a shamrock of my grandmother Angelita, who also accompanied me.

6 comments on “The end of a journey to remember”