We said goodbye to the family of Manel and Max’s girlfriend and dedicated the day to recharge our batteries for the next week as we were informed that it would be of relatively hard mountain to Milano … fortunately, as we explain later, it was not so bad.

We leave the campsite almost two hours later than the check out. The disorder of the weekend and the rain made complicate to preparing us out, but we were ready for the road. 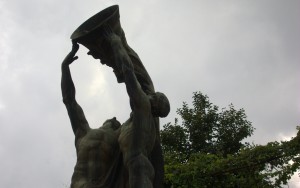 Lost in Genova, we managed to escape the city pursuing Decathlon signals. We spent night in Pontedecimo where Manel discovered that climbing very pronounced slopes it is impossible to push the poor Negrita, only five kilos separate them after carrying on water and food. 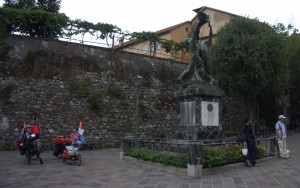 At first we were worried about the rise of Passo dei Giovi (472m), it wasn’t that bad. We looking for more Warmshowers in the “Antica Osteria della Stazione” restaurant where we were attended incredibly well and cook some delicious sanwiches. Grazie mille!!

We were informed of the route, everything we thought was wrong, super flat to Milano and we looking for a house in the city on Saturday. All this adding increasing rhythm, about 24km / h on the flat, influences us to have to “waste time visiting cities”. Tortona, Alessandria and Valenza were the chosen cities, but overall we liked more the little villages we met along the way. Recommended Lomello’s Basilica. 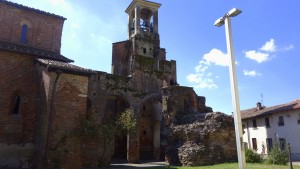 Thanks to Giulia and Giancarlo and their children for the fantastic night spent at home just like Marco, his sister Elisa and their neighbors Sergio and Rosita for the hospitality and the night in the wooden hut 🙂 we have no words to explain hospitality of Italians are showing toward us. Thanks a million!! 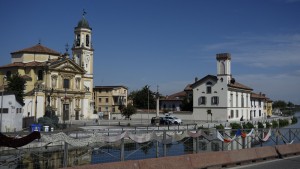 At the moment we are in Milanoin the house of our Warmshowers Eva.

A hug to everyone and thanks for all your messages and likes this making us the moral high!